Normally, everyone is born with two kidneys. The kidneys are organs that are imported for filtering waste from the blood and maintaining a stable blood pressure. More information (for both children and parents) can be found here. Some people, however, are born with only one functioning kidney. Often, this is discovered during one of the ultrasounds in pregnancy. Some children also go through an operation called a nephrectomy, in which one of the kidneys is removed. If there is only one kidney remaining we call this a solitary functioning kidney (SFK). In a person with a SFK, the remaining kidney has to do all the work by itself. In most people this remaining kidney is capable of doing so, although it often grows a bit bigger than normal.

People with two kidney have more kidney tissue than strictly needed. There is some extra capacity that is not needed in normal situations. Because of this extra capacity, it is possible to donate a kidney to a person with kidney failure. If one kidney is absent or not functioning, this other kidney will take over and kidney function will remain stable. In short, living with one kidney does not automatically lead to kidney problems.

There is, however, a difference between having a single functioning kidney from birth or childhood, and donating a kidney in adult life. In children, the SFK has to work much harder, which can lead to stress and damage in this remaining kidney. 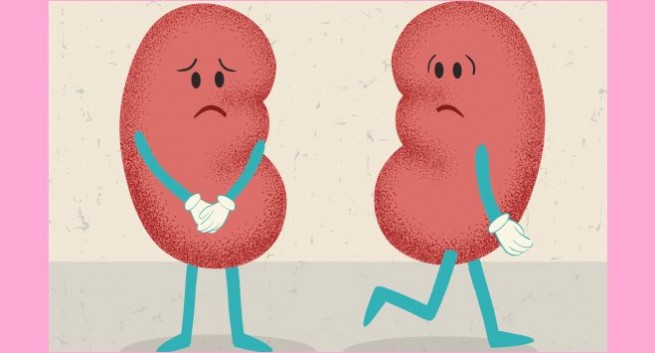 If the SFK is having trouble, the first signs are often an elevated blood pressures (hypertension) and/or leakage of proteins in the urine (proteinuria). If the SKF is damaged, its function can decline step by step, ultimately leading to kidney failure. Fortunately, this is very rare, although it is less rare in people with a solitary kidney than in people with two kidney. If a solitary kidney shows signs of damage, drugs can be given to protect the kidney. To identify damage as early as possible, children with a solitary functioning kidney should be checked by a doctor every year.

To investigate whether the solitary kidney is still working properly, the doctor (often a paediatrician) will check the blood pressure and investigate a urine sample for protein leakage. In case of high blood pressure or protein in the urine, more investigations will be done and blood samples have to be taken. The advice is to repeat an ultrasound every 5 years when no abnormalities are seen. When one of the investigations is abnormal, a child can be referred to a paediatric nephrologist, a paediatrician specialised in kidney diseases.

Children with a solitary functioning kidney do not automatically have kidney disease. Therefore, there are no special (dietary) rules for children with a solitary functioning kidney. Our advice is to be modest with salt and to avoid getting overweight. In short, pay attention to a healthy lifestyle and diet. It is possible to play sports; however high impact sports such as boxing can lead to a kidney contusion and should therefore be avoided.